Christ Lutheran Church of Hellertown traces its roots to the mid-19th Century, with a record group of Lutheran and Reformed Christians worshipping together during the days following the Civil War. On April 14, 1870, there was a formal organizational meeting, at which John F. Rentzheimer offered a building lot upon which to erect a Union Church. This was a common practice throughout Eastern Pennsylvania. The group of fifty-nine persons accepted the plan and the cornerstone for this building was laid in a two day ceremony, Saturday and Sunday, July 30 and 31, 1870. The following Spring, Whitsunday and Whitmonday, May 28 and 29, 1871, the building was formally dedicated for worship.

The 1870’s saw a considerable amount of official decision making in Hellertown. While there had been a village settlement here since the mid-18th Century, founded by Christopher Heller, the town was not officially incorporated until 1872. The Lutheran Branch of the Union Church was formally organized on July 26, 1870. The following comprised the first official Congregation Council: T. S. Eisenhart, H. H. Kline, William Apple, Moses Henninger, J. B. Leith, F. L. Reiman, James Wagner, Thomas K. Reichard, and John P. Rentzheimer. An official charter for the Union Church was obtained in 1874. 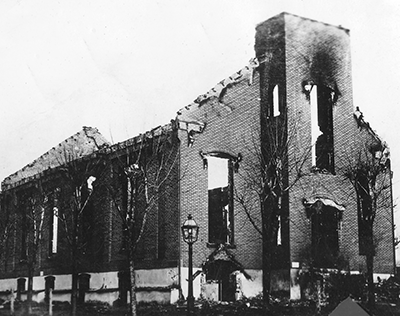 On July 17, 1890, a cyclone passed through Hellertown, raised the steeple from the building and set it on the ground. The steeple and a new bell were quickly installed. On April 17, 1896, lightning struck the building and it was completely destroyed by fire. An interesting sidelight to the tragedy was that it led to the founding of Dewey Fire Company of Hellertown.

The Union Congregation continued to meet in the Old Fellows Hall, where, on May 3, 1896, they decided to build a New Union Church. Serving on the joint building commitee was: J. S. Hess, George B. Deamer, Charles H. Bright, Charles Leidich, T. R. Laubach, and J. B. Leith. The new building was built of brick and timber from the land of Tobias Rentzheimer and Thomas Laubach. Sanctuary, offices and education annex were completed at a cost of $13,254.94. The building was dedicated on May 2, 1897. The new bell in the tower was a gift of Mr. and Mrs. Jacob Rentzheimer and was first tolled for the funeral of Mrs. Rentzheimer later that month.

In January, 1938, the union agreement with the Reformed congregation was dissolved when the Lutheran congregation purchased the property. Grounds and buildings were subsequently improved. In 1942, the congregation was of sufficient size to warrant the termination of the parish arrangement with Christ Church, Lower Saucon and Saint Luke’s Church, Old Williams. A new organ was installed in 1946. A major rebuilding and renovation program was completed in 1952.

Despite this rebuilding, the growth of Hellertown, and with it the congregation, proved the church and the church school too small. On January 20, 1963, our congregation voted unanimously to go forward with a building fund campaign to raise funds to build a new Church and Church School. During this time, Charles Fluck was President of Church Council. Council appointed a committee to study the type of campaign to be conducted. At a special congregational meeting on March 3, 1963, Church Council was given a unanimous vote of confidence. Kenneth Fulmer was Chairman of the Building for Tomorrow Crusade. Mr. and Mrs. Harrison W. Prosser offered to subscribe one dollar for every two dollars our congregation gave to our new building. 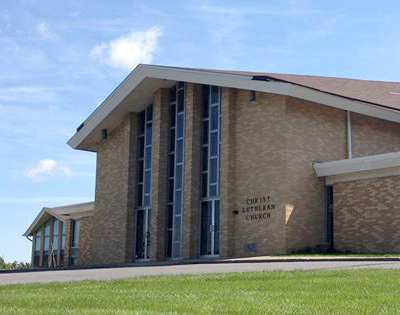 On the last Sunday after Trinity, November 23, 1969, our congregation said farewell to the old church. On the following Sunday, November 30, 1969, the new church at 69 South Main Street was dedicated. Cost of the new building was approximately $470,000.00. The Reverend Walter Hamester served as pastor during the building and dedication of the new church. 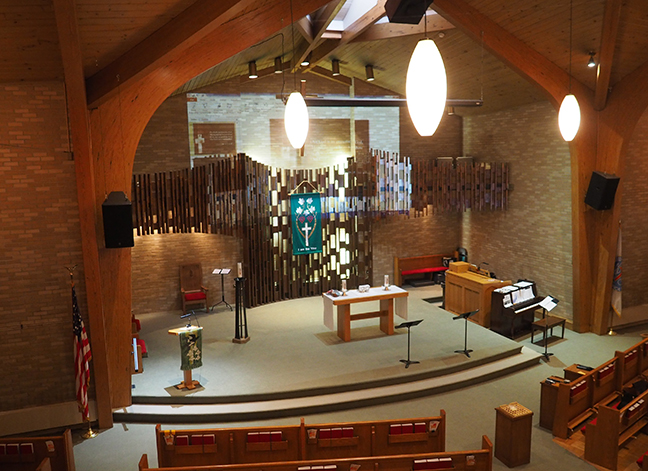 In May of 2005, our Congregation embarked on a building expansion effort called our “Love Grows Here” campaign to make necessary improvements to the church, including a new Heating and Cooling system to replace the original unit which was failing. An elevator was installed to make our facilities accessible by all and plans are being made to expand our Christian Learning Center… all to better meet the needs of the community in which we live and serve.

Sons of the congregation who have entered the Christian ministry are: